We were searching for a place to go and heard rumblings that Nishiki Ramen was set to open a few Sundays ago. There was a certain buzz around it and we decided to brave the potential wait for a hopefully good bowl of ramen. They have multiple locations in Japan but this is the first in the US. It is located in the same mall as Mitsuwa Market and Staples in Kearny Mesa.

We thought we were going to beat the majority of the people by going early. I guess people of San Diego really love their ramen as there was quite a line formed by the time we got there. We got there about 20 minutes before they were set to open and had to wait about 40 minutes to get in.

We were pretty hungry at this point and the front door never looked so good! I appreciated tint on the window which helps with protecting you from the sun, but much more importantly (at least in me eyes), so people in line aren’t encouraged to stare at you after each spoonful goes into your mouth and not theirs.

The wait is over. We’re in! The decor is simple, bright, and minimalist. I always enjoy being able to see the kitchen hustle bustle. Since they just opened it was especially frantic trying to perfect their process. Everyone working there was very nice and did their best to ensure we had everything we needed.

I was hoping to see their full menu but they were only offering the soft opening menu (plus the vegetarian ramen and edamame). It’s not like I could eat everything on a full menu. But the curiosity of what I would be in store for should I like it enough to come back continues to nag me.

The Chicken Karaage didn’t really stand out and a few pieces were a little dry. I’m not sure if it was supposed to come with any sauce but we could have used some to dip in.

We got the two meat ramen options in the Nishiki and Miso. Both are presented so beautifully. I think it’s probably the most visually appealing bowl of ramen I have ever had as far as plating and color combinations go. Long gone are the days of crushing a ramen pack, putting the seasoning in, and shaking it up. Looking at it doesn’t seem like you are eating just any regular bowl of ramen. But as you slurp your first noodles and the rush of the tonkotsu broth hits you, the familiar comfort and sense of satisfaction rise to the surface. Along with my initial sip, the first half of the bowl had me a believer. They make their whole grain noodles in house everyday and do not use MSG. You can tell they take their noodles seriously and are the best I have tasted in a long time. They had the perfect chew and the chashu is so thin and soft, it disappears after a few small bites . The broth was rich and thick, but after we got through the honeymoon phase I felt like there was something lacking. I wish there was more black sesame oil and maybe chashu for an extra bump in the pork department. I don’t know if the hype train got to me, but the second half of the bowl wasn’t as enjoyable as the first.

The chili oil gave the Miso Ramen a little different flavor which I also enjoyed. It was a little bit spicy, but nothing the average person couldn’t handle. The noodles were thicker in this ramen for some reason and I actually preferred them over the thinner ones in the Nishiki Ramen. When the noodle reigns supreme you want more in your mouth.

Overall the visit was a success. A great ramen for me is one that I enjoy the first sip as much as the last. I do think the hype got to me and I wasn’t feeling the final sips as much as the first ones. The last bowl of ramen I couldn’t stop eating was probably at Daikokuya in Los Angeles a few years ago. Where does that leave Nishiki? The noodles alone push it to the top 3 in SD. But the price has me shaking my head. I guess I need to try it again to be able to more clearly decide where it sits atop my ramen ranks.

Check out what Kirbie’s Cravings and mmm-yoso thought of Nishiki Ramen. 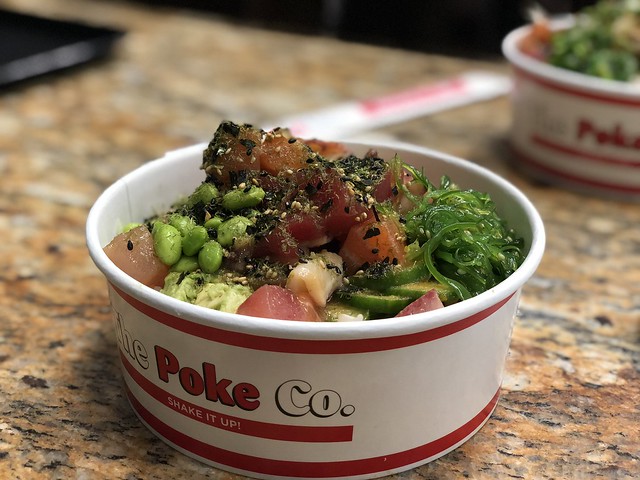